Ceiling Fans: Keep Your Cool While Saving Money and Energy

From our monthly email newsletter, an article about fans: 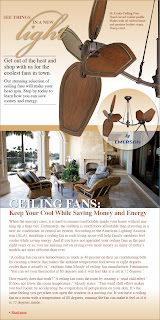 When the mercury rises, it is hard to remain comfortable inside your home without running up a huge bill. Fortunately, the solution is much more affordable than investing in a new air conditioner or central air system. According to the American Lighting Association (ALA), installing a ceiling fan in each living space will help family members feel cooler while saving energy. And if you have not upgraded your ceiling fans in the past eight years or so, you are missing out on saving even more money as many of today’s models are more efficient than ever. 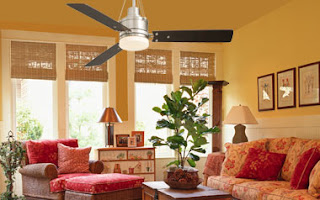 “A ceiling fan can save homeowners as much as 40 percent on their air conditioning bills by creating a breeze that makes the ambient temperature feel seven or eight degrees cooler than it actually is,” explains John Moody of ceiling fan manufacturer Fanimation. “You can set your thermostat at 80 degrees and it will feel like it is set at 72 degrees.”

How exactly does that work? “A ceiling fan cools the room by creating a ‘wind chill effect.’ It does not lower the room temperature,” Moody states. “This wind chill effect makes you feel cooler by accelerating the evaporation of perspiration on your skin. It’s the same feeling you get when you open the window in a moving car. If you have a ceiling fan in a room with a temperature of 80 degrees, running the fan can make it feel as if it is 72 degrees inside. When used in conjunction with an air conditioner, a ceiling fan can lower energy costs because you can now set the thermostat of your air conditioner at a higher temperature.”

Joe Rey-Barreau, education consultant for the ALA and an associate professor at the University of Kentucky’s School of Interior Design, agrees. “Ceiling fans have become popular in almost every room where people sit or stand for extended periods of time,” he notes.

For large homes, installing ceiling fans in laundry rooms and closets is becoming more common, according to Bethany Pirtle of Emerson Ceiling Fans. “While those may seem like unusual locations, having air circulation in those environments helps prevent staleness,” she says. “Master bathrooms are also a perfect place for smaller ceiling fans, because hair dryers and steam showers can make a bathroom hot and sticky. A small-span fan can quickly and efficiently add comfort.” 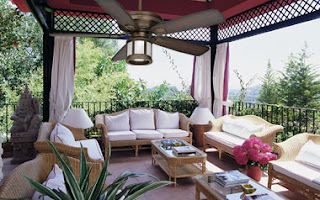 Another factor in determining where to install a ceiling fan is the fan’s UL listing. There are three basic UL-listed ratings for indoor, damp and wet locations. Fans that are rated only for indoors should not be used outside – even if the area is mostly covered.

“Moisture and humidity can affect both the performance of the motor and the stability of the blades,” Rey-Barreau explains, adding, “Fans that are rated for damp locations can be used either indoors or outside in a setting where they are in a protected environment such as a porch.” Wet-rated fans can be installed outdoors in situations where they will be in direct contact with water, such as in gazebos or mounted above a patio on the underside of a deck.

“The popularity of outdoor living environments has meant bringing along all of the amenities that make the inside so comfortable,” Pirtle says. She suggests selecting a wet location-rated ceiling fan with a light kit to provide nice mood lighting when enjoying the outdoor area after dusk.

Besides greater efficiency, the second most improved aspect of modern day ceiling fans is the wide variety. “Fan design has come a long way since the 1970s,” explains Tom Frampton of Fanimation. “You can now select a contemporary model with clean understated lines meant to blend into your décor for a ‘less is more’ approach or step out and select a model that serves as a focal point.” 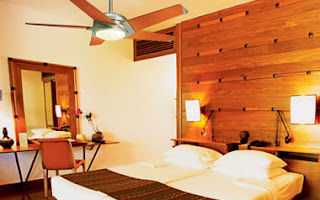 Rey-Barreau concurs, adding, “The range of ceiling fan styles available today is without boundaries. They have become as much a decorative element in a space as a decorative lighting fixture,” he says. “The broad range allows ceiling fans to be selected so that they support and enhance the design style of the furniture.”

Pirtle says that the sky (or better yet the ceiling) is the limit when it comes to aesthetics. “Every style you can imagine is available in a ceiling fan,” she explains. “Over the last 20 years, there has really been a shift from viewing the ceiling fan as an appliance to more of a home décor item. People care about how their furniture and lighting define their space and now – more than ever – there are decorative and viable solutions in ceiling fans as well.”

There is one caveat. As fans have become more stylish, the decision of which model to buy is often based on its looks alone. “This could result in selecting a fan that may not be properly suited to serve the functional needs of a space,” Rey-Barreau cautions. “There are a number of other issues that should be considered when selecting a fan that is aesthetically pleasing plus functional and practical.”