Happy 2013!
Linda Morley & I were both tickled to see this article in the Washington Post Metro section yesterday featuring the White House Lantern:  http://www.washingtonpost.com/local/edisons-bright-idea-lights-up-the-white-house/2013/01/05/8bfc8258-55ea-11e2-bf3e-76c0a789346f_story.html 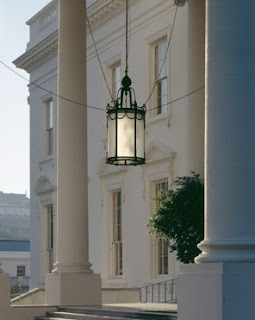 I became "tuned in" to this particular lantern many years ago when I had a custom home client who wanted a fixture just like this for his own front porch.  I ended up getting one custom made by one of our vendors, and it was also a beauty.  I don't recall that it was quite this large, though ~ John Kelly says the original is 3' wide by 7' tall!
I even learned a thing or two about this lantern ~ most notably that they replaced the electric candelabra inside with an LED cluster in 2008, making it much more energy efficient.  I imagine they were getting tired of changing light bulbs that high up!  I also did not realize it had been hanging there since 1902 ~ amazing!

And another fun fact for you ~ the lantern is even depicted via Legos in their White House set!  (Yes, I have 2 young boys who love Legos, and yes, they have put this one together.)