Did you know? Holiday Lights 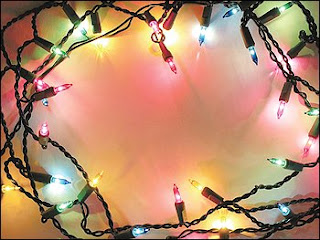 I'm a bit slow, but just saw this cute article in Thursday's Washington Post Local Living section about the history of holiday lights. I knew the White House tree had switched to LED technology last year, but I didn't know many of the other fun facts! 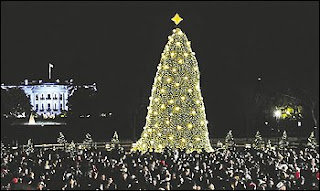 1882 Three years after Thomas Edison invented the light bulb, one of his associates, Edward Johnson, employs the first string of 80 red, white and blue bulbs on a Christmas tree.

1903 General Electric introduces the first light set for public sale for $12, then the average weekly wage of a typical American worker.

1923 President Calvin Coolidge walks from the White House to the Ellipse and "lights" the National Christmas Tree, decorated for the first time with 2,500 electric bulbs.

1973 Because of the national energy crisis, President Nixon decides not to light the National Christmas Tree.


National Christmas Tree by the numbers:

7,000
The total wattage consumption during the season. There will be 750 strings of white and green lights, 430 multicolored spheres and 84 white snowflakes, all LEDs. Each ornament consumes about 2 watts. The same topper, a 42-inch star, has been used four years in a row.

$180
Daily electricity consumption for the holiday season (based on six hours per night over 30 days at about 14 cents per kilowatt hour).

500,000
The number of U.S. homes that could be powered for a year with the energy consumed by one season of holiday lights.

$13.8 million
Remember to stay safe. This is the average amount of yearly property damage from fires caused by holiday lights from 2003 to 2007.