Light Bulb Changes on the Way

I did a post about this a couple of months back, but we get SO many questions about it, I thought it was worth talking about it again. When I went to the ALA Conference a few weeks ago, they gave us this handout: 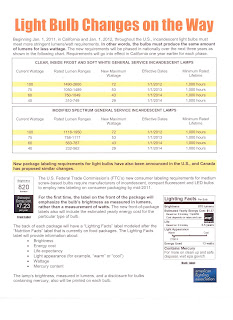 We hear a lot of talk that the incandescent bulb is being "banned". That is not completely accurate. The government is just forcing them to be much more efficient. The first one to be affected will be the 100-watt "A-lamp" ~ what you would think of as a "regular" light bulb. As of Jan. 1, 2012, to get the lumen output of the old 100-watt bulb (1490+ lumens), the manufacturers will have to get there using only 72 watts of energy. Thus, the new bulbs will be much more efficient. You could see what this is like RIGHT NOW by using a halogen replacement lamp. For example, Philips makes them under their "Halogena" name, and they have a 70-watt bulb that is 1600 lumens. It is shaped like the old bulb ~ it's just whiter and brighter and more efficient.
The other change that's coming is the new consumer labeling. Here is a close-up of that: 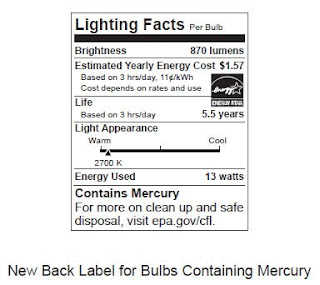 Once the changes start going into effect in 2012, we'll need to stop thinking about watts so much, and think more about lumens, which is the "brightness". Once we have these new labels, we'll be able to more easily compare the old A-lamp to a new halogen, compact fluorescent, or even an LED replacement lamp. Their wattages will vary widely, but the lumen comparison should be quite easy to follow. The other great fact on these labels that we hope to see by mid-2011 is the estimated energy cost per year per lamp. Of course the newer technologies like LED and CFL cost a bit more up front, but with these labels, we'll be able to see how much we can save over the life of the lamp, just by comparing the annual energy costs. Pretty neat!

Email ThisBlogThis!Share to TwitterShare to FacebookShare to Pinterest
Labels: ALA, ALA Conference, ban of incandescent light bulb, efficiency